Rumors and speculation have always been the most regular and sometimes most humorous events of visits with family.  If you come from a large one, you’re almost guaranteed at some point to hear the prompt, “Well, I heard…” or “There was talk…” and my favorite, “Folks was sayin’…”  As a child, whenever I heard anyone of those three phrases, my ears would stand up like antennae.  Even if I had no idea what they were talking about (old folks liked to speak in code back in the day), I knew it was something I wasn’t supposed to hear; which meant it was forbidden, and forbidden meant juicy gossip!

The rumors always centered around some poor, unfortunate woman getting pregnant out of wedlock, a married man sneaking around behind his wife’s back, a church pastor caught offering more than counseling, spirits of the deceased being seen returning home, and someone being the recipient of a hex or curse.

Rogers Askew, my paternal, great-uncle was the subject of a rumor.  One that is believed to have been the cause of his death.

I never knew that Rogers Askew existed until about 11 years ago.  I have no recollection of him ever being mentioned by anyone on the immediate paternal side of my family.  It wasn’t until I started reviewing the census records of my great-grandparents that I discovered he existed.

The last three years have been exciting.  I have newly found family members on my paternal side, and we remain in contact via email and Facebook.  The rumor the life of Rogers Askew is entangled in was shared with me by a cousin.  She remembered her grandmother and aunt talking about how Rogers Askew got himself “bewitched by a Geechee woman.”  When the family didn’t approve of their relationship, “he started acting like a fool, and when he finally got himself together and tried to leave her, she  killed him.”  I’d have to be nuts to not want to investigate this!

Rogers Askew is first seen at the age of three on the 1900 US Federal Census for Jonesboro, Clayton County, Georgia.  His month and year of birth are March 1897.

The census enumeration that takes place 10 years later records Rogers as 12 years old.  He works on the house farm and attends school.

At the time that I am composing this post, I have not been able to find Rogers on the 1920 or 1930 Federal Census.

Rogers Askew registered for the World War I draft on August 24, 1918.  WWI was over on November 11, 1918.  For that reason, I am doubtful that Rogers was officially drafted.

At the time of registration, Rogers lived at 222 Ira Street in Atlanta, Georgia and was working at the Candler Warehouse for the Quartermaster Corps of the United States Army (QMC USA).  Since he has an address, I am hopeful that I will eventually be able to find him on the 1920 and 1930 Federal Census.  Aside from providing a valid address for Rogers, it confirms that he was born in Clayton County, Georgia.  The registration card also confirms his father, William Askew, was born in Henry County Georgia and his mother was Lizzie Askew.  Based on the card, William and Lizzie were still living in Jonesboro, Georgia at the time.  This is the last of the information found on Rogers Askew while he was still alive. 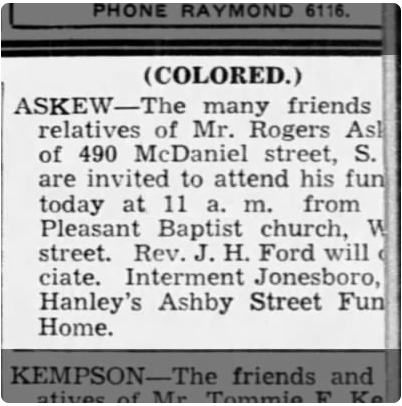 The obituary for Rogers Askew is quite easy to overlook.  It’s located on page 32 of the December 19, 1937 release of the The Atlanta Constitution.  It is peculiar that the obituary was posted on the same morning of his funeral.  Did the family really want friends and relatives to attend?  I am left wondering how many guests attended the funeral and interment.

After reviewing the documentation up to this point, there was never any mention of a Geechee woman, or any woman.  As far as my research had revealed, Rogers was a single man with no children.  He clearly was not married when he registered for the draft due to his mother being listed as his closest relative.

Rogers’ death certificate somewhat puts the rumor to rest.  Rogers’ cause of death was not murder.  In fact, far from it.  If my interpretations are correct, Rogers Askew spent approximately four months under a physician’s care for heart failure.  Could the mysterious Geechee woman have somehow caused the heart failure?!  I cannot believe I’m actually entertaining that thought.