After months of almost non-stop research to the point of dreaming about research, I finally found sufficient evidence (by my standards) of Josiah Askew, Sr.’s role in the American Revolution.

On page 38 of The Colonial Records of North Carolina, vol. 10, Josiah Askew, Sr.’s name appears.  It’s written as Josiah Askey, which is likely the reason why I had such difficulty finding the information.

The text that announces the names from page 37 reads:

[From MS. Records ix Office of Secretary of State.]

Martinborough, June 23” 1775.
The freeholders of the County of Pitt appeared and elected the following persons to be added to the Committee of this county, viz’:

Well, of course I had to look-up the definition of freeholder first.  Thank you, Encyclopedia.com!

After researching the term, I interpreted it to mean only males that owned properties or land outright, or valued at 40 shillings or more could vote and/or hold office.

So, Josiah Askew, Sr. (and others) was wealthy enough to be elected to the Safety Committee in Pitt County, North Carolina at the age of about 35.

I did not believe at the time that this was enough proof of Josiah, Sr.’s participation in the American Revolution.  I continued quickly scanning through the text, and on page 451 I found total confirmation. 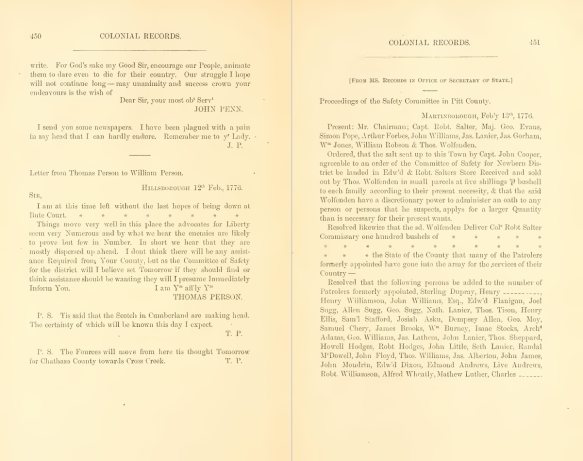 In a nutshell, Josiah Askew, Sr. participated in the American Revolution as a Patroler [sic].  Whether he was on the front lines of the revolt, or not, is unclear.