Why is it that when someone dies, there’s always some kind of drama that the deceased unintentionally leaves behind?  Or maybe, it IS intentional?

Josiah, Sr.’s widow, Constance, sued the heirs of his estate, his own children.  Constance was not pleased with being left just a few farm animals.  She wanted the ‘Negroes!’

The Negroes:  Josiah, Sr. gifted eight Negroes to three of his children.  Lewes (?), Garah (?), and Bob went to Eli Askew.  Charles, Millie, and Aaron went to Polly (now married to Thomas Harris).  Lastly, Sam and Moses went to Enos Askew.  Sadly, their ages, and how they were acquired (bought, born) is not mentioned.

After suing all heirs of Josiah Askew, Sr.’s estate, Constance again went into litigation.  Though the cover page of the petition mentions Enos Askew, it was likely Enos Askew et al as shown below, Constance had requested all living heirs to appear before the court.  Apparently, Constance payed for the subpoenas out of her own pocket. 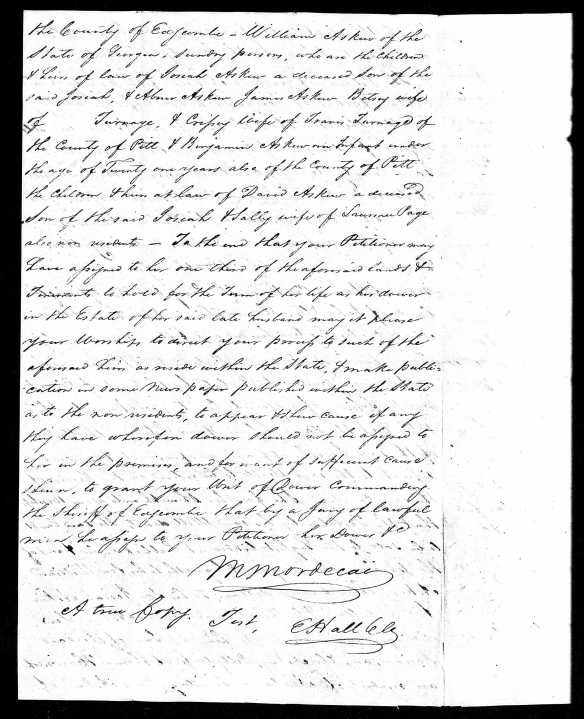 Constance petitioned the court to have Enos, Eli, and Polly subpoenaed.  Eli and Polly were living in Alabama at the time.  Enos was a resident of Edgecombe County, North Carolina.  If I’m correctly interpreting what I’m reading (the quality of the documents, along with the script makes it difficult to decipher), David and William are deceased.

In March 1819, the court issued a summons to be served by a sheriff to bring Enos Askew to the Superior Court of Equity in Edgecombe County, North Carolina, and be held on $700 bail along with two good freeholders.  I’m totally guessing at this because the script is so bad.

Hopefully, during my research I will be able to discover what happened to the slaves?  Were Eli, Polly, and Enos able to keep them?  Did Constance win her case and take possession of them?  Was Enos released on bail, or was he forced to remain imprisoned for a time?